Getting Started with Foreign Exchange

Visa provides daily FX rates for the 180+ global currencies that are used within VisaNet to authorize and settle transactions. The current list of supported currencies with their alphabetic and numeric ISO codes and their minor decimal places (for displaying amounts) can be found on the Request and Response Code Reference.

The Foreign Exchange Rates API is available for use by any developer in sandbox and production. However, Visa retains the right to review your project implementation of this API prior to production on-boarding to ensure appropriate use of its features.

The following table lists the regional availability for Foreign Exchange Rates APIs. The benchmark rates for the Enhanced FX API are available for currency pairs listed here. To view availability of all products, refer to the Availability Matrix.

The Foreign Exchange Rates API can be very useful whenever you are building a project that requires working with multi-currency or cross-border transactions, such as cross-border remittances or person-to-person money transfers. This API supports the exchange rates for one of the following scenarios:

The API also has two ways to apply an optional currency conversion markup.You may provide a specific markup rate in each request that you want to have applied on top of Visa's daily rate. Alternatively, you may be able to arrange with Visa to have predefined markup rates configured within VisaNet. In that case, Visa willl apply an appropriate markup rate to the converted amount and the markup rate used by Visa will be returned in the response message.

If you will be using the Foreign Exchange Rates API in conjunction with calls to the Funds Transfer API, you could optionally include the following fields in the request message (Acquiring BIN, Acquirer Country Code, and the Card Acceptor fields) with values that you plan to use in your Funds Transfer API calls. This will help tie up the reports.

If you are using the option to have Visa apply a previously configured markup rate to the request, you must include your Acquiring BIN in the request.

The API returns rates for all days including weekends and holidays based on the “asOfDate” passed in. For example if an “asOfDate” of 29th December 2019 (Sunday) is passed in when both Visa and Benchmark system (ECB) do not publish rates, the API will return the last refreshed rates as of 27th December 2019 (Friday) which was the last time rates from Benchmark system (ECB) and Visa were published. The “lastUpdatedVisaRate” element can be used by calling parties to find the date when the Visa rates they are receiving were last refreshed. Calling parties can use the “lastUpdatedBenchmarkRate” element to determine when the rates returned to them from a benchmark system like ECB, were last refreshed in the Visa systems. This methodology ensures that calling parties will always receive a rate back from the system but the staleness of the data can be determined by using the above two dates.

If the “asOfDate” is not provided by calling parties in the API request, the API will return the most recent rates available in the system for Visa and Benchmark system (ECB) rates.

For rates loaded before Feb 10th, 2020 to provide calling parties with 365 days back lookup, the “lastUpdatedVisaRate” and “lastUpdatedBenchmarkRate” will reflect a date before production launch but should not be used for check on data staleness since they are part of a one time load.

To get a quick overview of how to connect to the Visa Enhanced FX Rate API using Postman, refer to this video tutorial. 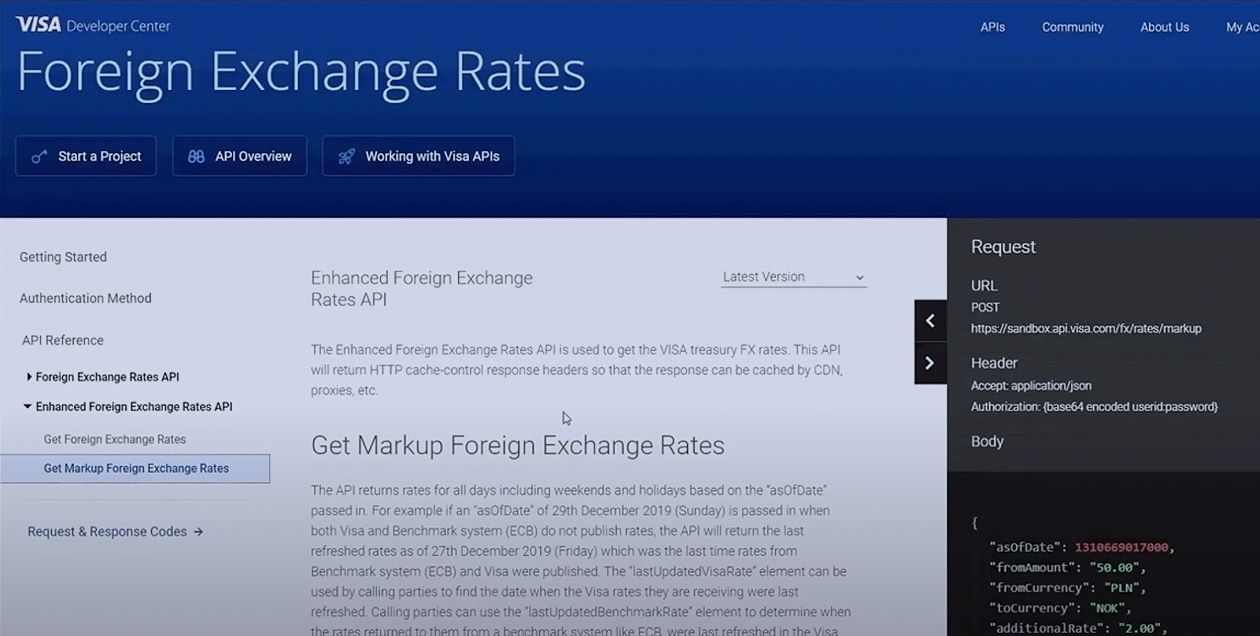